Forged deep in the psychedelic undertow of UMass basements, sticky floored queer clubs, house parties, porches, and backyards, Solo Sexx has been serving rude and riotous Salt-n-Pepa-meets-Buzzcocks-meets-Shangri Las realness since 2008. Since then, they’ve glittered and grinded all up over New England and beyond, performing at the Boston Freedom Rally, touring the East Coast, rocking festivals and events for the likes of Girls Rock Camp Boston, the Human Rights Campaign, Yes All Women, and more–all while bringing their unique brand of fearless flavor to audiences who leave wondering how they ever survived sans-Sexx. With a fearless sense of humor and a no-holds barred attitude, Solo Sexx turns the hip-hop hypocrites on their head and leads fans to a whole new horizon: with home cooked beats and outta sight rhymes covering everything from being broke (not for long), being white (last they checked), and being free to perform the self pleasure their name is shouting, Solo Sexx proves that the alternative to the add-water-and-stir rap chumpitude is funkier, fresher, and just plain sexxier than ever before.

Heather Mack: I grew up in the ‘burbs, moved out to Wild Western Mass to get weird for 5 years, then when I graduated from UMass decided it was time to take my chance on the “big” “city” of Boston. I’ve been here ever since!

Heather Mack: I think Boston is incredibly lucky to have a fierce faction of queer feminist badasses involved in all aspects of artmaking, from promotions to production to burlesque to punk rock and everything in between. The best part is, although the queer scene is relatively small, people are LOUD about it–in one week you might have Queeraoke, WTFQueerlesque, and Pink Noize, all unapologetically loud and raucous queer, feminist events happening at all different parts of town. And for the most part it’s pretty inclusive, like a big weird rainbow family you just might not have met yet. We freaks tend to stick together, and it makes a big difference.

Heather Mack: The first “queer” event I ever attended in the city was probably Rocky Horror back when it was in Harvard Square–I was just a little tyke back then! Since then I’ve felt incredibly blessed by all of the opportunities I’ve had to be involved in the queer scene, as a performer and as a fan. I’m not so sure about the scene’s “history”, since I didn’t really start identifying as queer until college out in W.Mass where I frequented queer events for the first time, and only since coming to Boston about 5 years ago have I gotten really involved in this scene in particular. Either way, I’m pumped to be out here making new queer history with so many awesome artists and visionaries, and I gotta say, the future’s looking bright! 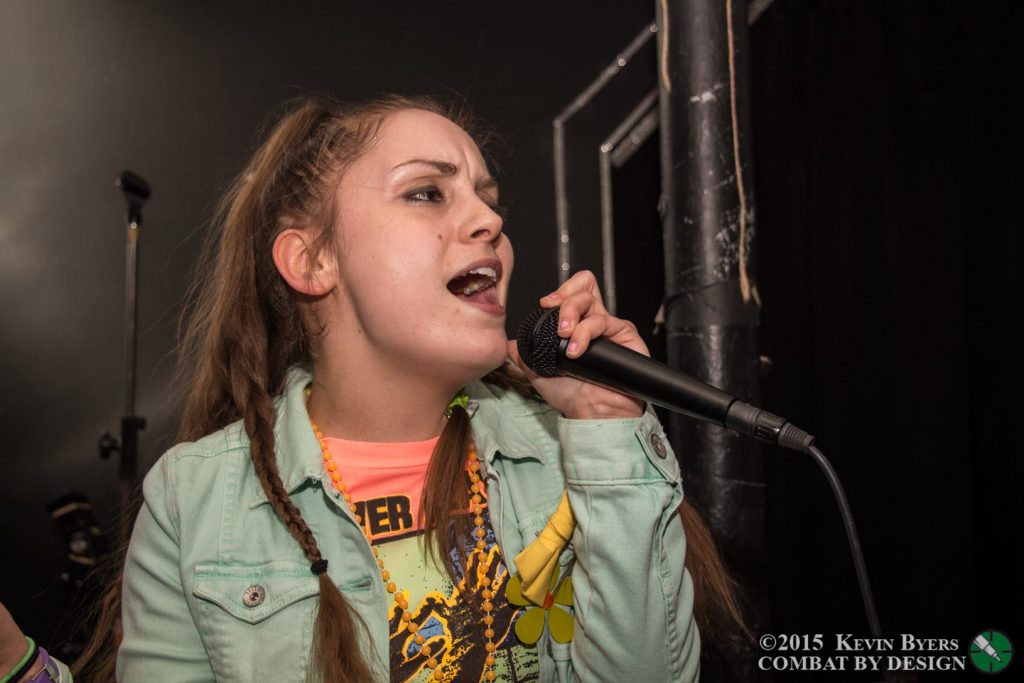 Julez:Being around creative people during those crucial college years who were also experimenting with music and constantly producing art of all genres. For me, the beats came first and I owe a lot of my early inspiration and motivation to that core group of creative friends.

Heather Mack: Julez really says it best, we were just incredibly lucky during our college years to have been part of a chaotic cotillion of psychedelic musicians, artists, visionaries and weirdos that had our own unique culture and community where everyone was not only free, but encouraged to experiment with everything, especially art. I had started a punk band when I was in high school called The Bush Administration and even though we didn’t take ourselves seriously I was really addicted to the feeling of shocking people onstage with something they didn’t expect, or would otherwise dismiss. I also already had an instinct for having a fully female fronted band performing songs that were filled with innuendo, and that riotous, raunchy energy provided the foundation for my later music.  In college I was part of a crew of dudes who were into hip hop and freestyling, then Julez transferred to UMass and everything got kicked into overdrive. She went home for winter break and taught herself to make beats, by the time she got back we were writing songs for just the two of us. That’s when we created “Solo Sexx”–the name is a reference to going solo, pleasing yourself first, and knowing that sometimes you just gotta do it on your own, you know?

Julez: DJ culture has always been a big influence on me. I was always trying to recreate the way DJs mix different sounds and samples together. So our beats reflects that.

Heather Mack: The internet is bringing things to a whole new level in a really positive way–I think queer female performers are getting much more visibility, and more and more celebrities are coming out as genderqueer and trans and sexually fluid, so that’s helpful in terms of breaking down old narratives and stereotypes around gender and sexuality. I also think there’s been a push to create intentional queer DIY spaces where those artists are not only welcome, but explicitly sought out and celebrated. The more visibility there is, the more we are able to give permission to other queer female or trans or genderfluid artists to be fully, wildly themselves–and to support one another in the process. I’m also pumped that venues tend to be really open to having queer events or having queer identified bands perform, and I’m happy to be able to host events like that too–like our upcoming Queer Women in Hip Hop night. 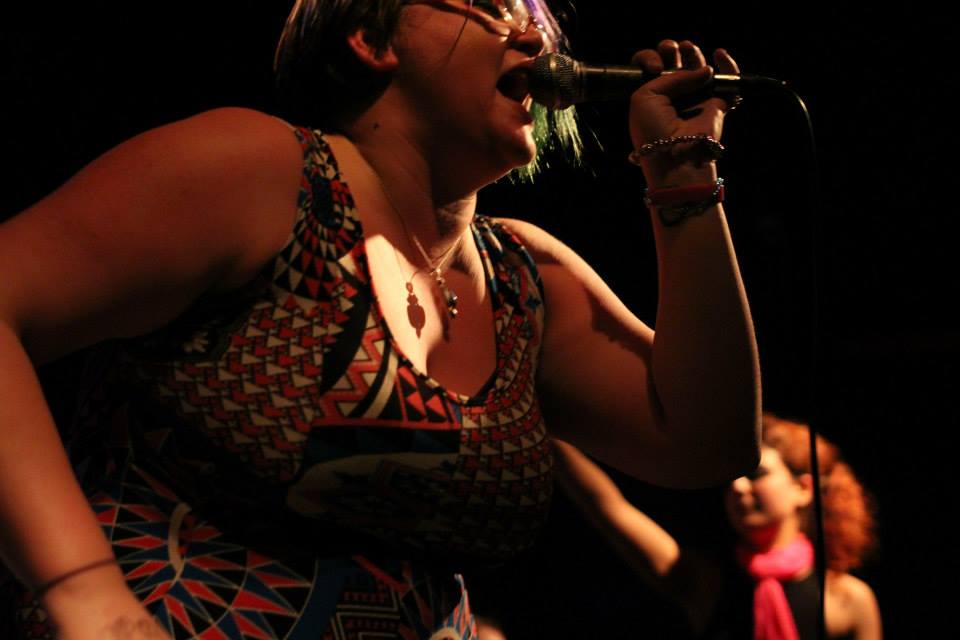 Heather Mack: Nope! But I am in the Boston League of Women Wrestlers.

Julez: Performing on stage at the weed rally in Boston a few years back! Such a huge crowd- felt like a rockstar.

Heather Mack: My favorite part of being in a band is the reactions we get from the crowd. Although every single show we invariably have some crew of (usually) dudes come up and say some version of “I thought you were gonna suck, but you were amazing!” and it’s always satisfying to know that you smashed a stranger’s perception of you, that’s not what makes me proud. What’s really incredible is when young women come up to us and tell us that we showed them that it’s possible to be a woman who raps and rocks crowds, and that we inspired them to try to make music too. As much as we do it for ourselves (hence the name, again), those moments are what sustains us and make us really proud of what we’re doing. That’s why we also love to do events for badass organizations like Yes All Women, Human Rights Campaign, and Girls Rock Camp Boston–because we know we’re offering up our art to help contribute to a positive, supportive community where people of all genders and sexualities have the resources they need to rock out in whatever way they choose.

Julez:YOU HAVE NOTHING TO LOSE! Seriously don’t be afraid to take that first step, and don’t doubt yourself too much. And if you’re lucky and the ideas and creativity starts flowing early on DON’T SLEEP ON IT! Make the most of it- it’s a precious commodity.

Heather Mack: DO IT! Make mistakes. Write a song, then scribble it out and start over 20 times. Then stop scribbling things out and embrace every flaw as a foundation for something fabulous. Go see local shows and discover new heroes. Make friends with your heroes. Book shows with your heroes! Don’t wait for other people to do things for you–learn everything you can by throwing yourself into it. If you feel like there aren’t enough cool venues in Boston, create one. If bookers don’t want to book a hip hop show, bypass them and book shows yourself. Make other amazing friends who create weirdo art and love you for it and hold you accountable to your aspirations. Be reckless, fearless, and bold–even if you’re terrified. There’s no time like the present–and life’s too damn short to be boring!

Heather Mack: Check out Afro Panther (iamafropanther.soundcloud.com) and Billy Dean Thomas (facebook.com/billydeanslist), two artists who will be performing along with us at our upcoming Queer Women in Hip Hop showcase at the Lilypad, January 30th!

For more from Solo Sexx: